The owners of the Allendale home had grown weary of their 1980s white formica kitchen. When Glen Lumia, president of Creative Design Construction, suggested drawing inspiration from the natural rear landscape, the kitchen renovation was off and running. Bamboo privacy screens at the pool sparked Lumia�s idea for carbonized bamboo cabinetry throughout the kitchen. Breaking up the expanse of bamboo are uba tuba granite countertops, stainless steel appliances, and a slate backsplash inspired by hardscaping in the backyard. “The kitchen looks like it was carved into the side of a mountain,” Lumia says. The 14-by-14-foot kitchen was a challenge because it opens to an 8-by-10-foot breakfast area, and the remaining three sides are cut up with doors or windows. To ease traffic flow and create a spot where people can visit with the cook without getting in the way, Lumia angled one end of the island. He also installed pocket doors leading into the mudroom and living room and a swinging door into the dining room. He moved the refrigerator/freezer between the latter two doors, allowing him to extend the cabinetry. Steel shelves beside an enlarged window lend an open look. “The homeowners used to hate going into the kitchen,” Lumia says. “Now it’s their favorite room.” 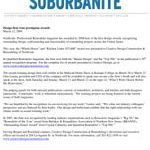 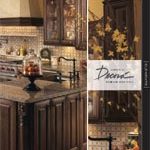